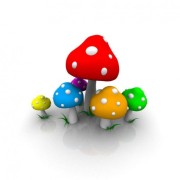 One strange September day a few years ago, a Dutch chef provided me with a packed lunch containing a magic ingredient. It certainly made my day’s fishing a very vivid and memorable experience.

I was at my favourite pub in Hampshire where I often stayed when fishing. Up at the bar, the chef, we’ll call him “Ernst” from Amsterdam, told me about his interest in mushrooms and the potential hallucinogenic properties that some of them possessed. One particular variety known as the “Magic Mushroom” contained a form of LSD which caused powerful hallucinations and was regularly “enjoyed” when added to food. He recounted his fungus collecting excursions on misty autumn mornings, armed with a reference book to safely identify the mushrooms, and a plastic bag in which to collect them.

In turn, I told Ernst about an evening I had once spent in a pub where a large, rounded mushroom with a wide body and pinkish glow had spent the whole night telling jokes and buying everyone drinks. He had certainly been a “fungi to be with”. Ho ho. I thought nothing more about our conversation that night.

The next morning I strolled along the banks of my favourite chalk stream on the final day of my trout fishing season. I enjoyed the “peep” of the kingfishers as they flew upstream, their vibrant blue and orange plumage striking in the morning sun. The swans glided past, clearing their throats with a strangled cough and a haughty waggle of their tail feathers.

Close by a heron hunched, and then gently extended his neck before spearing his beak with a lightning strike into the water to seize a young and unwary trout.

I caught fish that morning as well, including a beautiful wild trout which was already heavy with eggs. I returned her to the river.

At the fishing hut for lunch, I settled into a wicker chair and tucked into the delicious cheese and mushroom quiche made for me by Ernst the chef. He had assured me that “only the freshest and most magical ingredients” were used in his recipe. I was hungry and ate it all, noting the wiry mushrooms that added a piquant taste to the cheese and sherry filling, and washed it all down with a cup of tea from my flask.

The day had turned out to be glorious with not a cloud to be seen. I thought back to the appalling summer we had just experienced: severe flooding and drenched English holidays.

As the sun warmed and soothed my limbs, I sipped my tea and nibbled on fruit cake. It was one of those days that come along once in a while during September which make you stop in the sunshine and say to yourself out loud, “God, I love this country”. And so I said just that, and sat watching time glide by in the river next to me. I was starting to feel alive. Really, really alive.

A vibrant and intense heat began flowing round my body. I was tingling; hot blood fizzing through my arteries; my body so alert I was sure I was vibrating. The green of the river bank and the foliage of the trees grew in intensity, as though my vision’s “saturation level” had been increased. Then I noticed the increasing levels in contrast between light and shadow. Visually, I was having a Photoshop moment. It now dawned on me that, thanks to Ernst’s “most magical ingredients”, I was having a mushroom moment too. He must have put some of the “magic” variety into the quiche! My imagination was out of control, and what I imagined now seemed perfectly real. I was starting to have hallucinations. Help.

Looking down I “realised” the ground around me was swarming with ants. In fact there were dozens of ant nests, piled up along the bank where the molehills had been earlier. Zillions of ants, everywhere. Each mound was vibrating with activity so intense it made the ground vibrate as well. The surface of the river bank was covered in a carpet of black dots, zinging with life. Concerned that the ants would cover me as well, I headed to the nearby table for protection.

As I scrambled up on to the table, I noticed two “Victorian ladies” in their white dresses, gliding up the river with sunburnt faces, peering through their dark glasses . One of them looked me up and down in a curious way, cleared her throat and waved. I waved back, feebly.

Then the “Victorian gentleman” came by, straightening out the creases of his blue and grey overcoat, his long and slender neck supporting his head adorned with a flat cap made of white cloth and black side panelling. This gentleman had style, I thought, as he smoked his orange cigar. He waited a while, cooling his feet in this shallow stretch of river, and then peered intently into the water. Without any warning, he stubbed out his cigar with a sharp lunge, and as he withdrew it from the water, I noticed a shimmering cloud of silver smoke which was sucked back into the cigar itself.

Two low flying jets diverted my attention, whistling as they skimmed across the surface of the river. Their vibrant blue and orange fuselages glinted in the sun. I lay prone on my table top vantage point. The view was now somewhat… horizontal. I remained there for quite some time, chuckling like a baby at nothing in particular.

I giggled myself off the table and onto the ground. The ants had disappeared, and I crept over to the “hunting lodge” that was formerly the fishing hut. The shadows had lengthened by now. I collected my belongings and started to shuffle upstream towards the pub where I was staying for a final night. It was now nearly dark and I was wary of what the river may still have in store for me.

I froze in disbelief. Swimming downstream towards me was… a… a… c-r-o-c-o-d-i-l-e! On the River Test. Fancy that. Fifteen feet long, it was broad-backed and had a tail that swayed from side to side, thrusting its head and powerful jaws ever closer to the shivering and pathetic prey that I had become. Should I stay still, or run? Stay still… or run? Run… or stay still? Where was my gun? I had no gun; only a fishing rod and net. My dilemma ended when, at that moment, the crocodile broke up into an explosion of splashing and quacking fragments.

Gratefully, as I left the river bank and joined the country lane which led back to the pub, I could feel the hot tingling sensation in my veins start to ebb away. Then, just as quickly and equally without warning; the sensation that had invaded my body, now left. By the time I arrived back at the pub, I felt perfectly normal.

“Did you enjoy your Magical Mushroom Surprise?” Ernst inquired expectantly from the kitchen door as I walked into the bar.

I gave him an unamused and withering look, “We’re both lucky I didn’t end up face down in the river.”

“Sorry”, Ernst replied, rubbing his bristly chin thoughtfully. “But the other guests seem to be enjoying them”. He retreated back into the kitchen.

I turned and made my way to the stairs at the end of the bar, carefully avoiding the elderly gentleman sitting astride the stuffed pike on the carpet, normally mounted above the fireplace.

“I’ve got him. I’ve got him!” the man exclaimed triumphantly. “Mustn’t let him get away now! See if Agnes needs a hand will you? She’s in the snug… got problems of her own… with a ferret.”

I looked up at the empty glass case next to the window where the stuffed animal was normally displayed, then winced at the hysterical shrieks of laughter coming from the other room. I decided to leave them to it.

I wished him luck and headed up to my room. I was in need of an early night.